Fukishima update - Can I eat some Salmon?

My last post on Fukishima, seen here, was back in 2011. I made the statement that North America had nothing to worry about, yet and that it was primarily a Japan problem (I feel very sad for what Japan is going through). I still stand by that statement even though some things have changed.

Firstly, the airborne releases are minimal and not even detectable 6,000 miles away on the west coast of Canada and the USA. That is good. 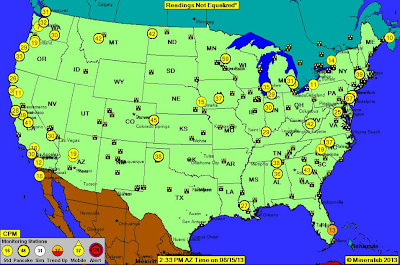 Secondly, we find out that TEPCO has been leaking 300 tons of contaminated water per day into the Pacific. So, my main question...Is it safe to eat Pacific Salmon in BC.

Well, common sense says that Cessium 137 (Cs-137) and Strontium 90 (Sr-90) should sink in the water. I found a reference to that scenario here. It states:

A swift deep current along the coast of Japan is expected to pull the low concentration of radioactive particles from the Fukushima plant to a depth of about 300 feet and dilute it all by a factor of 50 to 100, researchers said.

The prevailing currents then carry the material out to sea, away from beaches and inhabited coasts.

Swept out to sea, depending on the material, many radioactive isotopes such as cesium-137 and strontium-90 usually sink and then remain suspended at depth in the ocean water, sometimes for decades, but have little direct effect on salt-water fish, scientists said.

I know that Cs-137 doesn't bio accumulate in marine life and I was more worried about Sr-90 because it is absorbed into the bones and any calcium rich organs and stays there. After some research, I found this study, Strontium-90 in ﬁsh from the lakes of the Chernobyl Exclusion Zone.

It goes into lots of detail, but the main idea can be expressed in the following graph. 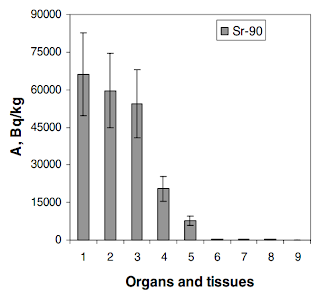 Notice that the scales, bones, fins and head absorb most of the Sr-90, but the muscles absorb almost nothing. Since, we eat the muscles usually, this is a good thing. Also, 70-80% of ingested Sr-90 is eliminated from the fish and also from humans.

This data mostly made me feel better, but I still wanted to see some real world testing. I found an independent test performed last year from a couple living in Seattle, WA. They were testing for Cs-137, but since both Cs-137 and Sr-90 are being constantly leaked from Fukishima, if you don't detect one in a fish, then it stands to reason that the other isn't present in that fish as well. Here is what they got back from the lab.

EACH SAMPLE WAS MEASURED FOR 40,000 SECONDS ON A HIGH PURITY GERANIUM DETECTOR

The units Bq/kg are Becquerels per kilogram, a measurement of decay rate of an isotope. One Becquerel is another way of saying "one nuclear decay per second."

So, we are good to go on wild Pacific Salmon, but I wouldn't want seafood shipped in from Japan. And we still have the leak going on. I also worry about the next phase of cleanup in which spent rods have to be manually moved from a cooling pond. We'll just have to keep watching this. 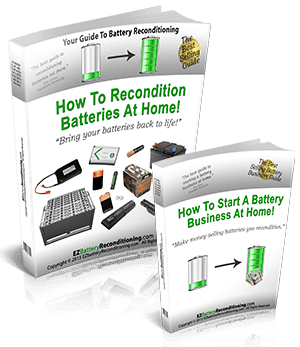