This is a follow up on my last post about cheap air conditioning.  I started looking for a whole house fan but the ones I found looked fairly expensive.  About $200 to $900 depending on what I was looking for.  I didn't want to cut a hole in the ceiling and most of them wouldn't fit in my back window.  I started looking at regular fans and finally box fans.  A typical 20 inch box fan has about 2,000 cubic feet per minute (cfm) of air flow.  A typical 16 inch fan has about 1000 cfm.  So, I decided to pick up a couple of $24 box fans from Canadian Tire.  The same fan in the states at Target has been seen for $12 or so.

I cut some plywood to fit the back window and cut holes in it to accommodate the fans.  I took the front faces off the fans and used the grill as a template to mark the size and screw holes. 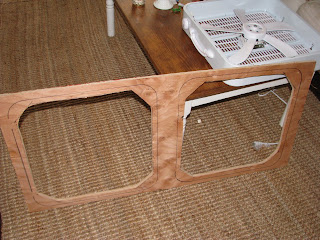 I cut the hole about 1 inch smaller all around than the grill.  I used zip ties to hold the fan to the plywood by using the front face screw holes.

Here they are in the back window. The top one is upside down so it is easier to turn off and on. You have to have both running at the same time or it does no good.  If just one is on, then the air just goes in a small circle. Both these fans blow out and that causes air to come into the house through the windows. 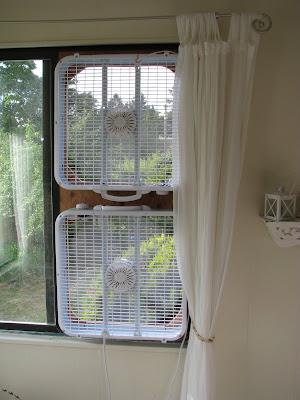 It is really nice.  I turned them on and every window I opened had a really good breeze blowing.  It completely refreshed our house air in about 2 minutes at a whopping 4,000 cfm.  As soon as the sun set we actually started to get cold and had to shut it down. 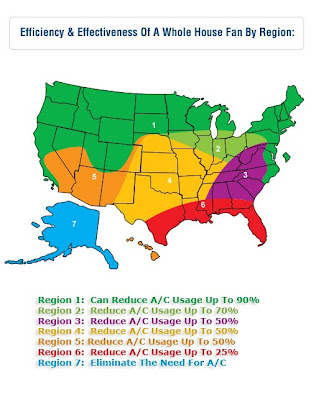 The above picture is from a website for whole house fans.  You can see what kind of savings can be accomplished based on where you live.  I checked the wattage with my trusty kill-a-watt meter.  It showed 142 watts for low, 153 watts on medium, and 164 watts on high.  And that is both fans together.  A window mount AC (that would only cool one or two rooms) uses about 1000 to 1500 watts.  A full house AC can use 10 times that.